Caveman behavioural traits might kick in at Thanksgiving table before eating 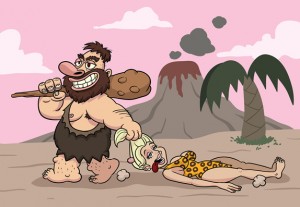 Frank Kachanoff was surprised. He thought the sight of meat on the table would make people more aggressive, not less. After all, don’t football coaches feed their players big hunks of red meat before a game in hopes of pumping them up? And what about our images of a grunting or growling animal snarling at anyone who dares take their meat away from them? Wouldn’t that go for humans, too?

Kachanoff, a researcher with a special interest in evolution at McGill University’s Department of Psychology, has discovered quite the reverse. According to research presented at a recent symposium at McGill, seeing meat appears to make human beings significantly less aggressive. “I was inspired by research on priming and aggression, that has shown that just looking at an object which is learned to be associated with aggression, such as a gun, can make someone more likely to behave aggressively. I wanted to know if we might respond aggressively to certain stimuli in our environment not because of learned associations, but because of an innate predisposition. I wanted to know if just looking at the meat would suffice to provoke an aggressive behavior.”

The idea that meat would illicit aggressive behaviour makes sense, as it would have helped our primate ancestors with hunting, co-opting and protecting their meat resources. Kachanoff believed that humans may therefore have evolved an innate predisposition to respond aggressively towards meat, and recruited 82 males to test his theory, using long-established techniques for provoking and measuring aggression. The experiment itself was quite simple – subjects had to punish a script reader every time he made an error while sorting photos, some with pictures of meat, and others with neutral imagery. The subjects believed that they could inflict various volumes of sound, including “painful,” to the script reader, which he would hear after his performance. While the research team figured that the group sorting pictures of meat would inflict more discomfort on the reader, they were very surprised by the results.

“We used imagery of meat that was ready to eat. In terms of behaviour, with the benefit of hindsight, it would make sense that our ancestors would be calm, as they would be surrounded by friends and family at meal time,” Kachanoff explained. “I would like to run this experiment again, using hunting images. Perhaps Thanksgiving next year will be a great opportunity for a do-over!”

Evolutionary psychologists believe it is useful to look at innate reflexes in order to better understand societal trends and personal behavior. Kachanoff’s research is important because it looks at ways society may influence environmental factors to decrease the likelihood of aggressive behavior. His research was carried out under the direction of Dr. Donald Taylor and Ph.D student, Ms. Julie Caouette of McGill’s Department of Psychology, and was presented at the university’s annual undergraduate science symposium.