Millions of British workers feel forced to lie about stress 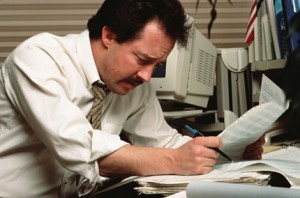 Millions of British workers feel forced to lie to their bosses about having to take stress-induced sick leave, research reveals.

Stress has forced one in five workers (19 per cent) to call in sick, yet the vast majority of these (93 per cent) say they have lied to their boss about the real reason for not turning up, citing everything from stomach upsets, housing problems and the illness of a loved one as reasons for their absence.

Stress can be a taboo word in many workplaces, but pretending the problem isn’t there only makes things worse. Looking after stress levels and promoting a mentally healthy workplace reduces sick leave, helps staff to stay productive and ultimately saves hard-pressed businesses money. In the current climate, it will be increasingly hard for businesses to prosper with an unhappy and stressed workforce, so it’s vital they work with their employees to discuss pressures on staff before they escalate. Curious? Continue reading

Is your job making you depressed?

Most people in today’s economy are happy just to have a job — any job. But work-related factors like long hours, a poor relationship with your boss, and lack of control over daily tasks — factors that can get worse when the boss is pinching pennies — can contribute to depression as well.

Clearly having a job is better than not having one when you really need it. Those who are unemployed tend to have higher rates of depression (almost 13 percent) than those who are employed full time (7 percent).

But research suggests that some jobs can be more depression-prone than others for a variety of reasons, and certain work-related factors are known to be particularly bad for those already struggling with depression. read more

Stress at work linked to an increased risk of developing rheumatoid arthritis.

A Swedish study published in one of the latest issue of Psychotherapy and Psychosomatics discloses new relationships between stress at work and development of rheumatoid arthritis.

Psychosocial work stress, in terms of high psychological demands, low decision latitude or the combination of these stressors (job strain), is associated with an increased risk of several diseases (e.g. cardiovascular disease), but it has not been studied in relation to rheumatoid arthritis (RA). However, research on the relationship between psychosocial work stress and immunological parameters also suggests a possible association with inflammatory conditions, including RA. In order to investigate whether high psychological job demands, low decision latitude and job strain are associated with the risk of developing RA, a group of Swedish investigators used data from EIRA, a large population-based case-control study with incident cases of RA. The study base comprised the population, aged 18–65 years, in middle and southern parts of Sweden during 1996–2003. In total, 1,221 cases and 1,454 controls participated. END_OF_DOCUMENT_TOKEN_TO_BE_REPLACED

Different factors predict the health of women and men

Meaning and balance in everyday life are predictors of health among women. However, the most important predictor of health among men is their ability to manage the demands of their working life, these are the findings of a study by Carita HÃ¥kansson, senior lecturer at the School of Health Sciences, JÃ¶nkÃ¶ping in Sweden.